When Leanne came to me with the idea of starting a blog together I was a little overwhelmed. While I have learned so much about horses and humans in my years on this planet I also feel that I have so much to learn. After thinking and talking it out we decided to go ahead with the project as a way to share our own experiences, even those we still feel that we are very much in the middle of experiencing now. That is pretty much where I am with Positive Reinforcement also referred to often as Clicker Training for horses. I’m not really sure exactly how long it has been since I first heard about it or decided to give it a try and I’m not even sure how far along I am in my own understanding on this subject but what I’ve experienced so far is so good that I need to share. My hope is that in a year I can revisit this post and share even more.

A bit of background for anyone just tuning in, my horse Bucket and I have been partners for 14 years, this year that is exactly half of my life that I have lived with my brown horse by my side. During these years together we have had some pretty amazing highs and some pretty frightening lows. We have trailered to shows and trail rides, he has served as a therapeutic riding facilitator, and been several peoples first experience up close and personal with a horse. He is retired from riding due to an old injury and until recently one thing we had not tried together was to train with a positive reinforcement based approach.

What Is Positive Reinforcement and How do I Apply it?

In order to talk about what I have experienced with Positive Reinforcement, I’ll give a brief background on Operant Conditioning. This idea was named by Burrhus Frederic Skinner and provides a basis for how animals can learn.  Marijke de Jong provides a great explanation on her website.

Through operant conditioning, an individual makes an association between a particular behavior and a consequence (Skinner, 1938). The potential consequences to behaviors are listed below.

Today I will focus on the top bullet point and in my practice positive reinforcement looks something like this:

This is a simplified version of what is happening and the order of events that I hope to happen but it’s not always the case. Often he says ‘No’, and in those cases, I drop the ask. After a ‘No’, I will sometimes disengage totally for a few moments or redirect and ask for something that he is more confident with and then try the more difficult ask again later.

While I can’t say I use +R all of the time, over the past several months I have been trying to focus my training on using positive reinforcement to help understand how it works.

What I’ve Experienced with My Horse Through +R

During the first few months of focusing on +R I felt like I was doing a lot of asking and getting ‘NO’ as a response frequently. It took time for me to truly let go of my attachment for what I wanted and just allow him to say ‘No’ without there being a consequence to that response. After a while of not being coerced into a response after saying ‘No’ he began to become more interested and gradually he started to say ‘Yes’ more! I love this video by Mustang Maddy on How to Let Your Horse Say “No” Without Ruining Your Training.

During this time I have also transitioned from working in the arena to spending the majority of my time working with Bucket in his field where he has access to his friends, grass and free-choice hay.  The main reason for this is that by allowing him to have access to food I was not serving as the only source of food and in turn forcing him to comply with my requests to get food. This made my job a bit more challenging but by using rewards I have been able to build motivation in Bucket for work/play and the idea of asking him to connect and perform behaviors at liberty in his field is the norm. He now even will begin to offer some of his favorite tricks on his own now! 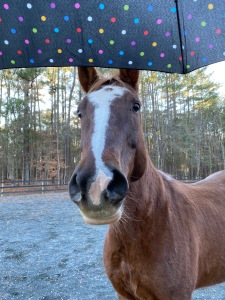 From my perspective Bucket also seems to have more confidence. Offering his own tricks is one way I have observed this but I’ve also noticed a change in his reaction to uncertain situations. For example when I bring novel items out into the pasture or arena. Earlier this week I took an umbrella into the arena for the first time and as I was trying to open it slowly to get him accustomed to it but my hand slipped and it popped open. To my surprise, he stood still and although his eyes got a bit wide he relaxed quickly and was soon walking beside me with the umbrella over us both.

Some Setbacks I Faced in Getting Started

Learning anything new can take time and will not always be a linear process so I want to share a few of the setbacks I experienced and some helpful tips that may help if you decide to experiment with positive reinforcement.

It can take a while to find your groove and it may feel like things are falling apart before they come back together. If you have a horse who is very motivated by food, you may find that they have trouble focusing on the task at hand and are just screaming MORE COOKIES at you. You may not need to even use food as a reinforcer, anything the horse enjoys can be used as a reinforcer like scratches!

A great way to work through over eagerness around food is by starting in protective contact, or in a space where you can physically separate yourself from the horse. This may mean working with your horse across a fence. Eventually, as your horse starts to understand that the reinforcers come after the requested behavior and not from nipping, you can start to make that barrier smaller until you feel comfortable being in the same space as the horse.

This can also be solved by using reinforcers of a lower value.  I use Timothy/Alfalfa pellets since they aren’t as exciting as higher sugar content treats like apples or other processed treats. I like using these pellets since they are fairly easy to keep and dispense from a pocket or fanny pack. Do be aware when using hay pellets that they expand when in contact with water, be careful not to overfeed and wait until the horse has chewed and swallowed before moving on to the next ask.

The opposite can also occur where the horse may get uninterested because the reinforcers do not occur enough or not of a high enough value. Early on I experienced sessions where Bucket would ‘drop’ his penis from it’s sheath. After reading on the subject from +R trainers I was following specifically this post from Adele Shaw of the Willing Equine, I realized that this could be a sign of frustration due to confusion or not enough reinforcement. I increased my rate of reinforcement for more difficult asks and now that I think about it he hasn’t dropped since then. Over time as behaviors become more solid I have been decreasing the rate of reinforcement again and reserving a high rate of reinforcement for new concepts.

The hardest part about trying positive reinforcement? Finding treats in my washing machine, cup holders of my car, the pockets of every jacket I ever put on, etc.

Finding Joy With My Horse Through Trying Something New

For me, the biggest change I’ve noticed in using +R is that my relationship with Bucket is flourishing. I’m not sure if the style of training we are using now is ‘right’ for everyone but I am having fun and I’m pretty sure Bucket is having fun too and that’s all that matters for us.

I’m not sure exactly what the future has in store for Bucket and I but I plan to continue using +R to build motivation, confidence and have fun with my horse. I am thankful to live in a time where equestrians are able to try new ideas and share experiences. We have a resources section in the works where we will post other trainers, podcasts, books and more! Give +R a try and let me know what you think in the comments!

We couldn’t agree with @mustangmaddy more, it’s not easy to show up for someone else when you haven’t first looked inside. Reading for fun and for education can be a wonderful tool for introspection. How do you honor and take care of your self?
Today’s blog is a republished version of our friend @camilouwhooo recent Facebook post where she uses her understanding of Natural Lifemanship and her experience working with trauma informed EAP at @corralriding to explain why our country is seeing one of the largest uprisings over racial inequality and violence sparked by the public murder of #GeorgeFloyd
“No one can ignore a black woman on a horse” ⁃ Brianna Noble
Being at the beginning of a new journey with our horses can seem daunting. This quote from Alexandra Kurland is a helpful reminder that no matter where we begin we can always look to our horse for guidance, they will show us the way.
“Trust is choosing to make something important to you vulnerable to the actions of someone else.” - Charles Feltman
Moments like these are bound to happen with horses. Have a wonderful weekend!
Loading Comments...
%d bloggers like this: